Well, hello out there! No, you are not imagining things and no it ain't some ghost or hacker...it is indeed ME breaking the silence around here after...geez, it's been literally more than six months and I believe I have broken a record blog-wise =/

Can't say I'm proud or happy about it, but sometimes the jigsaws just do NOT fall into place....it's been a really busy time these past months...frankly, at times I've felt as I was living in a different dimension and eventually came back to the real world....can't quite explain that feeling....
Well, unfortunately, the project I was working on and that kept me overhumanly busy, came to an end...and the workaholic in me is just so depressed now that I fear it's gonna put me again in some state of feeling like not wanting to do anything....cos no matter how tired I get and how many sleepless nights it gives me, you know, I'm in love with my job and with so many things related to it...*sigh*
Anyways, I thought it would really suck if I ended the year in an over 6-months silence, so I thought of using this Tuesday morning a bit wisely and unrust myself - and I feel really rusty regarding all this, but I thing it doesn't have some long-lasting effects...at least I hope...
And of course, this whole period also had an effect on my postcrossing activities...may I say there were barely any? But that's why there were still some lovely people out there who kept my mailbox busy and prevented it from spiders crawling all over it...and one of them sent me this great postcard below, and moreover, contributed to adding a new country on my list....and that is Glenn , who unlike me has been regularly updating his blog...feel free to check it out :) 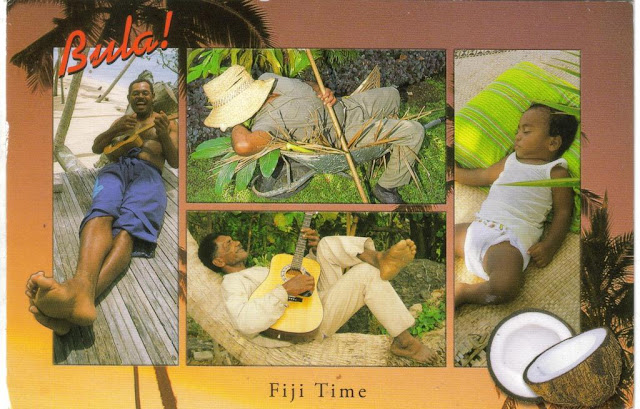 And the gem from Glenn's hands arrived from Fiji! Oh yeah, Fiji baby, you are off the list now! :D You know, one of those countries you don't believe you will ever receive a postcard from. And speaking of those countries, watch out for the future posts here (I cannot promise when they are going to happen though but I hope it won't be another six months), and check out some of those 'off-the-list' countries :P

There is a funny quote on the back of the card, saying "We searched, high and low, for the Fijian word for 'hasta mañana', but fouund that there was no word here for anything so urgent"! - Glenbo, 1999

Who is this Glenbo guy, I have no idea...google wasn't in a good mood either...so if anyone knows anything about this, feel free to drop me a line or two :)

Speaking of Fiji, it won't be too bad to teleport myself there right now, and flee from this f***ing pollution....seriously people, you have no idea how polluted it is here...and it is the same story every single year once November strikes...it is said that we are like the most polluted city in Europe right now.....and every year the Government is like 'trying' to solve it with some yada-dada solutions, but usually they are ridiculous and last just for a day or two, but no long-term solutions or anything...nothing!  Whenever I go out, esp. on my bike, I have my face-mask on otherwise the air is just all scratchy on your throat and nostrils...and I'm sure they don't have such a problem on Fiji, do they? 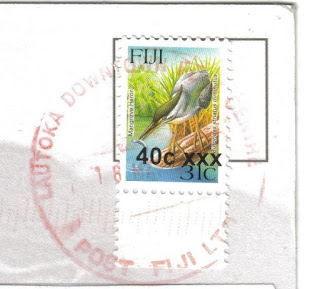 Thanks so much once again Glenn for this and all the fantastic cards you sent me this past year!!
Posted by Ana
Email ThisBlogThis!Share to TwitterShare to FacebookShare to Pinterest
Labels: 2015, Fiji, surprises

Hey Ana,wow one of my cards makes your blog after such a long absence.How good is that. Iam honoured. Fiji would feel so good right about now, don't you think ? Writing out postcards in the sand, the sun and with one of those little drinks with an umbrella in it ,just to the side. Sounds good.
Cheers,
Long live postcards.
Glenn

Yeah, I wouldnt mind being somewhere like in Fiji right now...though some other options aint that bad either...keep an eye on your mailbox :D :P