Not sure what has been my longest hiatus on the blog, but these almost-eight-months might win the trophy.

Where has that time passed?
Well, it's been one really strange year, and when I look back, so much has happened, both good and bad, that in the blink of an eye, without properly realizing it, 2020 is at its doorstep.

Not that I havent been busy with mail... my mailbox has been welcoming postcards from all over, and I have even been more active in sending compared to the last few years... but it is this blog that has paid the price cos seems that I am not that multitasking as women in general are thought to be.

It has come to the point that I haven't even managed to brag about a new country to my collection and it already arrived during the summer... so after all the silence, here is a beauty coming from the Cook Islands - it is so cold here and so polluted that I would trade for a scenery like this without thinking twice... 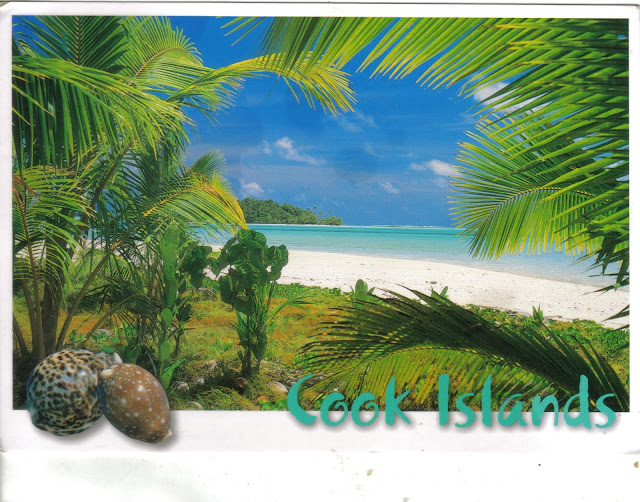 Way back, during my junior postcrossing years, I did receive a card from the Cook Islands, but it was blank (sent in an envelope with some other cards from the USA I think...), and just now I noticed that I had never ever posted it... cos yeah, what is the thrill about a blank piece of cardboard, when at the end of the day, is something I could have printed myself... I should look for that blank card and send it to someone who collects blank cards, now that I am properly covered with Cook Islands and can tick it off my list...

The card says to show two beautiful little islands in the middle of Aitutaki's pristine lagoon. This view of Rapota is from Motu Rakau, where TV series Survivor and Shipwreck were both filmed (don't know about you, but I have watched neither...) 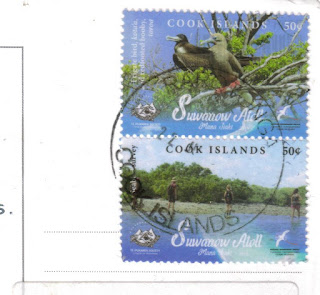 Two beautiful stamps from a set of 6 issued this year, from the Suwarrow Atoll National Park series.

Thanks to Azzi for this gem in my collection!
Posted by Ana
Email ThisBlogThis!Share to TwitterShare to FacebookShare to Pinterest
Labels: 2019, Cook Islands, Going on vacation RR