Hello from the other side....

sooo, finally a few words from here....from the far-away land of China! (well, that depends where you actually are...it may not be THAT far-away...in fact, China may be nearer than Macedonia to your place :)

anyways, not so long ago I kinda announced that I may be going to China....and that 'maybe' turned into 'i should really use this opportunity' which finally ended into me landing here in Guangzhou exactly one month ago...yep, believe it or not it's been a month since I've been living here. I know I should have made some post earlier, but for the first days I was all jet-lagged, and then there have been many things to do...and then when I have some free time, all I feel like doing is sleep sleep sleep, or just watch a movie....but I believe that I should really kinda commemorate this small anniversary and just say hello and say Im safe and sound and all :) 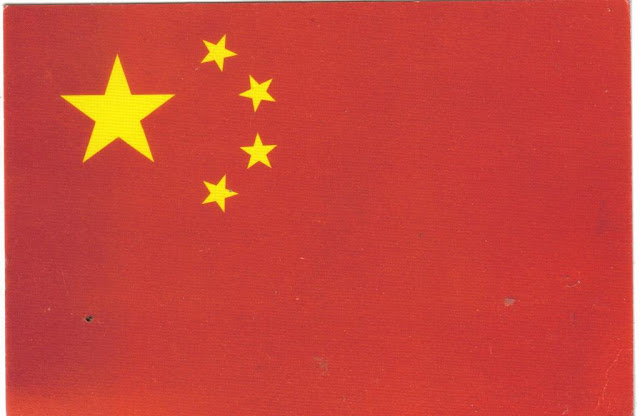 I could talk about my impressions for hours and hours...frankly, I feel as if I've been here for like a year...Macedonia feels so distant at the moment that it makes me even sad...I don't miss the country or the places there, but I really miss my family and friends, but I guess that's kinda normal...I miss them even when I go on short trips and all. However, this time is really different, and I still don't know for how long this trip of a life time will last, but I hope I won't have to pack my bags next month and go back home :)

I still haven't sent a single card from here, for two reasons - first, financially I am trying to be wise and not spend money on cards and stamps and stuff, and second, I still haven't even seen a place selling cards which is kinda weird since the city is just HUGE!! Yeah, HUGE!! 14 million people give or take, third biggest in China, and yet I still haven't spotted postcards....but I found a philatelic shop though, which may be even more dangerous! :D 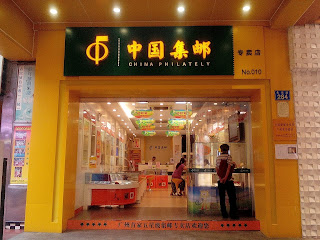 But I have this feeling the language barrier will be a problem...you know, I've never felt more miserable in my life for not knowing a particular language, but here, I do..I feel like I've just dropped from outer space and have been randomly thrown here, feeling completely lost when it comes to the language...I mean, geez, it is even impossible to comprehend a single thing, not to mention that the only way I could make most of the people understand me is body language...cos no, they DON'T speak English and no they won't even try (most of the people - but there is this girl working in a supermarket nearby, and she really tries hard to talk to me in English, I really love her for that!

Speaking of mail...there should be mailboxes in the building where I am, but I still haven't seen them...plus I still don't feel comfortable receiving mail here...but my Macedonian address is always valid, so if you send me something there, my parents will take care of it, just that I'm not sure when I will be able to let you know it has arrived =/

Well, I have seen just a few places here, as I said, whenever I have some free time, I feel like sleeping..plus the weather here is sooo terrible (very hot and humid, or hot and with rain/showers) that often you don't even feel like going anywhere :) 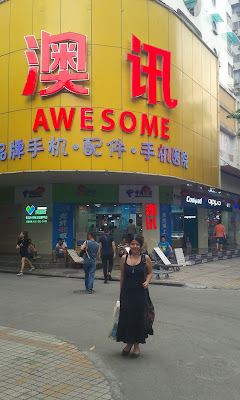 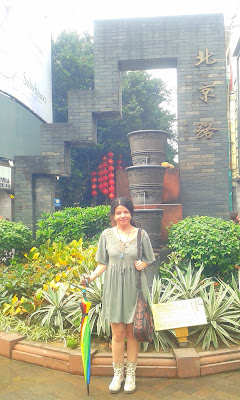 this is the view from my apartment (: 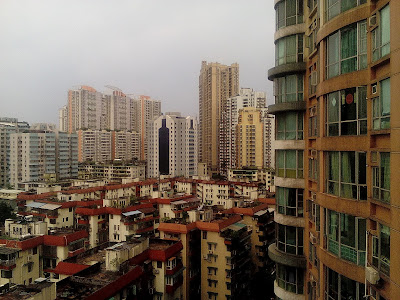 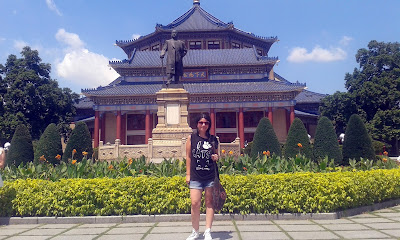 Yeah, I really am in China, in case you thought I was joking :D

If you wanna know whether I like it here or not...I don't know, everything is still interesting and there are so many new things and all...but I think that my adjustment has been going pretty well, and that's kinda really important to me...and thank God there are some other Macedonian expats here, so in the end you don't feel THAT lonely in a city of 14 million people. Of course, everyone is busy and all, but in a way it does feel comforting to know someone from your own country (one is actually a dear colleague of mine from University, so that makes things even better! :)) 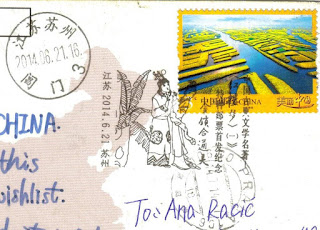 Funny thing about these two cards is that I received them both as a part of a swap...I don't know why I would swap for two flag cards, or maybe it was within a short period of time...who would remember, but anyways, I love the pictorial postmark on the first one...maybe if I am lucky, I will get something nice like this in that philately shop :)

as for that next time, I can't tell when it;s gonna happen...you know, apart from the busy life, things like gmail and fb and blogger don't really function here in China unless you use some VPN services, which are not 100% functional, so sometimes you just feel like cut-off from the real world, which from time to time may not be such a bad idea :)

Anyways, big hug to you all, and see you around, sooner or later! :)
Posted by Ana
Email ThisBlogThis!Share to TwitterShare to FacebookShare to Pinterest
Labels: 2014, China, flags, swap

I love getting postcards from China. I get them through postcrossing.com plus friends. I love your photos! The cancellation picture is awesome!

Hi Ana, that is quite exciting that you are experiencing gorgeous China!!! Looking forward to hearing more of your adventures here!!