well, get ready for a longish post full of train cards from the Czech Republic, all coming with a whole variety of lovely Czech stamps....and you know, it was while selecting the cards for this post that I realized the huge number of Czech train cards I have received...my initial idea was like to post them all but that turned out absolutely inconvenient...so I decided to stick to a small part of it... 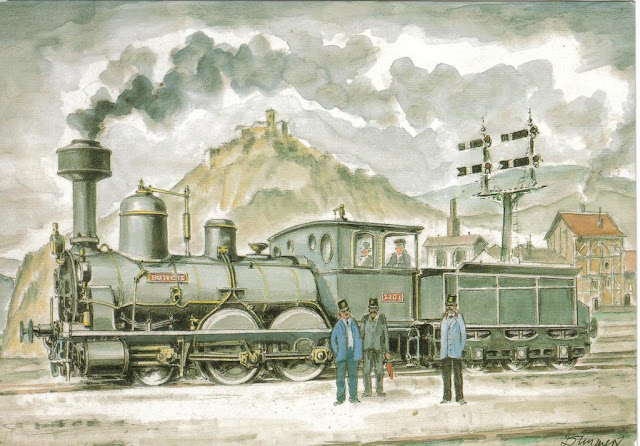 and first comes a card I received from Monika last year...
This illustration, showing the 220.1, the oldest locomotive in the Czech Republic, produced in 1858 and it was issued as a commemoration of the 150th anniversary of the arrival of the first train to Prague Masaryk Station.

the stamp on the left was issued in 1995 in a set of two 'Homeland' stamps, with this one showing the Panska Skala, also known as the Lord's Rock, while the other stamp was issued in 2013, commemorating th 400th Anniversary of the Bible of Kralice. 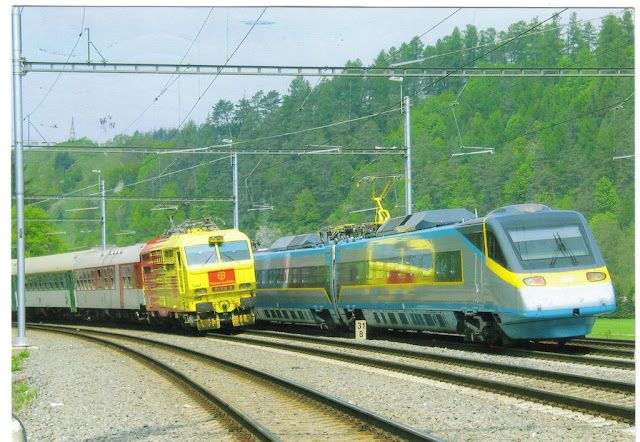 The modern blue and white one is called Pendolino and is considered as the fastest train in the Czech Republic (well at least it was when this card was mailed). The other one is a regular train (and as Katka says, not very comfortable), bearing the logo of Poštovní spořitelna, one of the banks in the country...so it is something like an advertisement train... 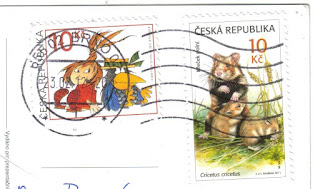 both stamps here were issued in 2011....the one on the left was issued in 2011 for the Children's Day, showing the Little Witch, a feature film by Zdeněk Smetana...the other one is from the Young Animals series and shows the European Hamster.


The title of this one translates into "Full Steam ahead into the New Year"...I don't know if this was meant as a New Year greeting card or what, but I do like the correlation :) 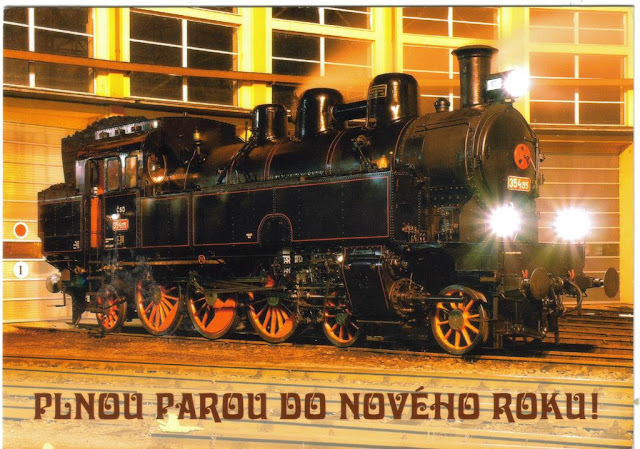 sent by Radana for the Favourites Tag in 2013, this card shows the 354 195, CSD Steam locomotive, manufactured in 1925 by ČKD (Českomoravská Kolben-Daněk). 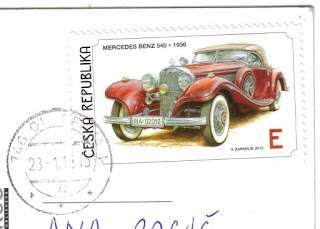 a beautiful car stamp showing the Mercedes Benz 540, manufactured in 1936. the stamp is from a set of 6 Classic Cars stamps issued in 2012.


This steam engine was sent by Milan on the very last day in 2010 for the Czecho-Slovakia meets the world tag... 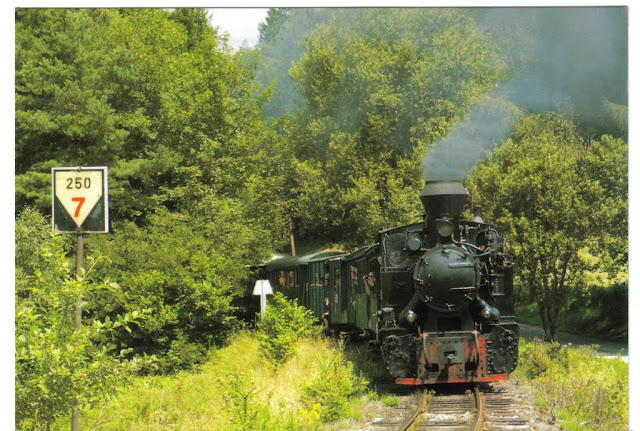 it shows the U 46.001 Steam Engine train on one of the few narrow-gauge railways in the Czech Republic, near the town of Jindřichův Hradec in South Bohemia.

3 stamps here (don't be fooled by the big one which came with the...well, I dont know if this is the vignette or the selvage but it comes as a nice addition - the stamp in question was issued in 2010, and it is from a joint issue with Luxembourg, commemorating the 700th Anniversary of the Succession of Luxembourg to the Czech Throne.
The one on the right is from 2000 from the Zodiac series, representing the Virgo, while the flower stamp is from a set of two issued in 2007.
It's been a while since I've seen Milan around, I hope he is doing fine :) 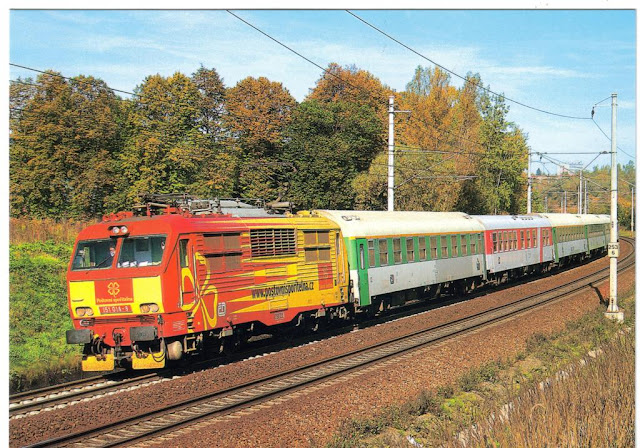 the card shows the IC 141 "Detvan" Praha-Zvolen train, which has just left the Ústí nad Orlicí station on 14 September 2006.
The 151014-8  Locomotovie (the Prague depot) in the Czech Railways was the only locomotive of this series, which had the advertising painting of Poštovní spořitelna in of 2006. Five other locomotives of the series 362/363 propagated also this company, while other vehicles were then given advertising stickers of this financial institution.

a stamp issued for the Olympic Games in London in 2012.


And a train card which I often confuse with the one above since they like bear the same colours and I often get to confuse them, but just now I realized it is because of that famous Poštovní spořitelna that they are advertising... 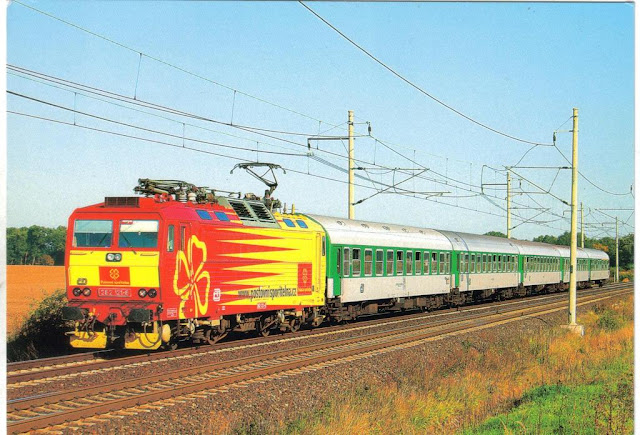 Sent in 2014 from someone called Erika or something...on behalf of Goran...and now I cant recall if I have ever figured out which Goran was in question here, since I know two who could potentially be involved in such a surprise...so I dont know now if i had ever thanked the right Goran...shame on me =/

and a fantastic Mucha stamp issued in 2010 in a set of two, commemorating 150 years since his birth !!


now comes a card that I dont know what did it actually go through on its journey, to arrive in such a condition in the end.. 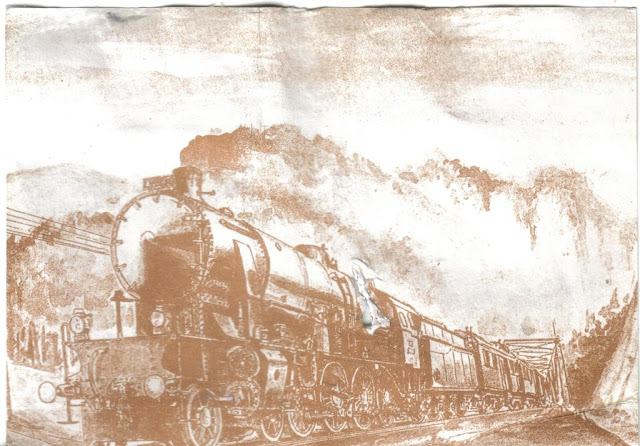 This express steam train dates back to 1917, which for that time was considered as the company's largest and most modern machine and had its last journey somewhere in the mid-60s.

at least the stamps didn't suffer some greater damage....three nice ones...starting from the left, issued in 2010, from the "For the Children" series, here we have a stamp commemorating Helena Zmatlíková, one of the leading Czech female illustrators of children's books.
In the middle there is a Chrysantemum stamp issued in 2011, and at the right we have the Christmas stamp from 2011.


Hope you are holding on, since there are three cards left.... 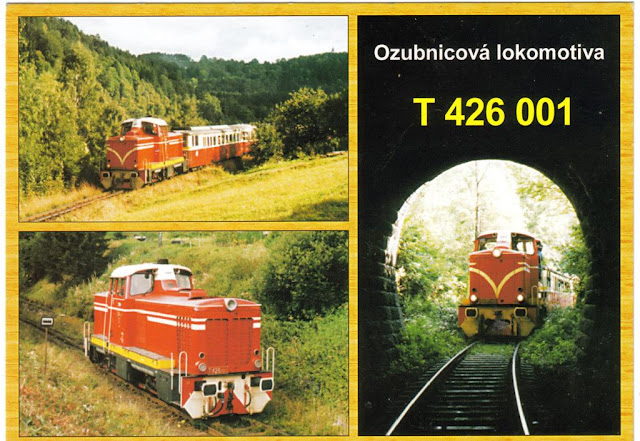 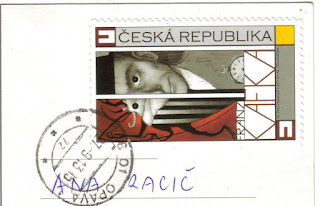 a nice stamp issued in 2013 commemorating Franz Kafka on a stamp which portrays a realistic-looking beetle. As a symbol of relentless metamorphosis, not always for the better, the beetle is set in austere, even unsympathetic modules.

Another card from Radim... 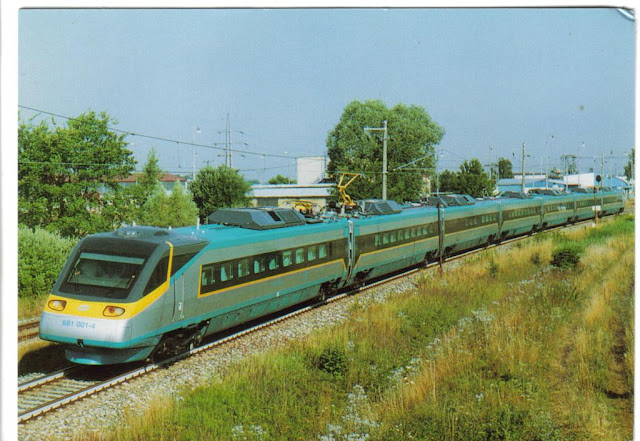 ...where again you can see the Pendolino... 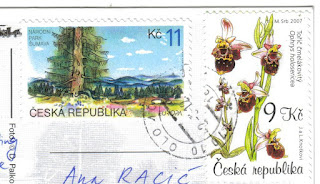 ...and two nice stamps on the back..the one on the left is from the EUROPA issue from 1999 on National Parks, and here you can see the Šumava National Park. The other stamp was issued in 2007 and comes from a fantastic sheet on which the White Carpathian Mountains and Orchid Meadows Unesco Biosphere Reservation. On this particular stamp you can see the Ophrys holosericea.

aaaand as promised few cards above, here comes the last one for today.. 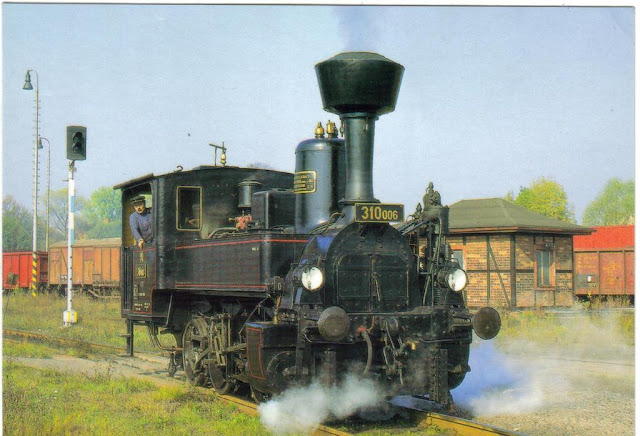 an official card sent by the Raab Family, showing the 310 006 Locomotive..

...which came with three lovely stamps (in case you have followed this post from start till end, maybe you noticed that all the stamps shown were different, no repetitions or such :)).
Anyways, the first stamp is from a set of three Old Aeroplanes, issued in 1996. The middle one was issued in 2003, commemorating the 100th Anniversary of the First Electric Railroad Connection, while the last one is from 2000, showing a train from 1900 with a steam locomotive, service coach and carriages for passengers - it is from the set of two stamps for the Transport issue, comparing the Railway of 1900 and 2000.

What a great assortment of trains Ana, very educational too! And the stamps coming from the Czech Republic lately are quite impressive. Thanks for sharing some of this great collection of trains and stamps with us!

thanks for the comments both..and this comprises just 1/3 of my total assortment of Czech train cards....and seems that more are always coming :D but yes, the Czech stamps are quite impressive indeed :)

What a lovely collection!