ok, one more card for today...no, sorry...that would be, one more POST for today but three cards....

this spectacular card was sent by Maria...I don't know if the colours are real, or it has been a bit photoshopped, but it is not like I really care, cos this final product is just pure perfection!

It is named for Capt. M.J. Tokarev, whose ship surveyed the area in 1862-63. In recent years the tower has been dwarfed by a huge modern tower that carries power lines across the Vladivostok harbor entrance. Located at the end of a mole at the entrance to Vladivostok harbor and at the extreme southwestern tip of the Egersheld Peninsula. Accessible in good weather by a hike of about 3 km (2 mi) from the end of the city's bus line. However, the access to the lighthouse is underwater at high tide.

and wouldn't you be squealing with excitement when you see that your lighthouse card comes with a matching lighthouse stamp??? I know I do  *blush*
It was issued in 2010, to commemorate the 150th Anniversary of the City of Vladivostok. Well they really picked the perfect subject for the commemoration.
The other two are the set of 2008 definitives 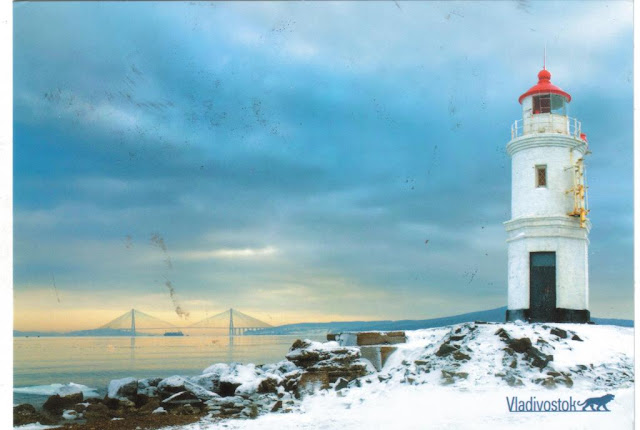 this one is an official....the lighthouse at wintertime...in the background you can see the bridge to the Russkiy island.

and again a fantastic match, since Elena, the sender, also used the Vladivostok stamp..plus besides another definitive, she also used another lovely lighthouse stamp, from a set of 3 issued in 2005 - this one represents the Mudyugsky lighthouse 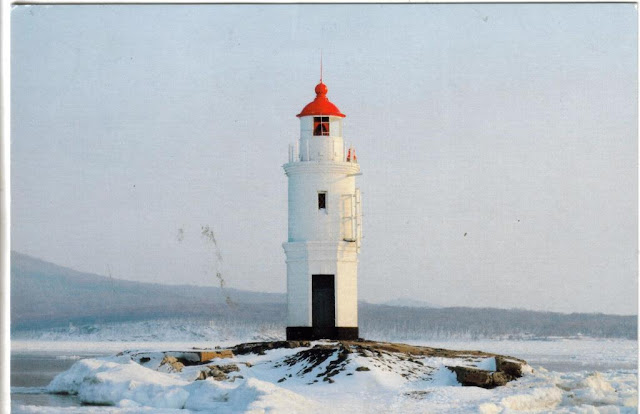 another version of the lighthouse that arrived as an official...the lighthouse in its winter glory....yeah, there is some special mysterious charming feeling about lighthouses in winter, in the midst of frozens seas.... 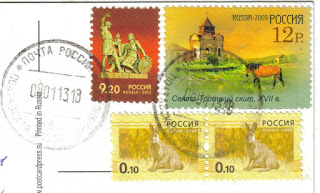 there is a 2008 definitive at the bottom...at the top, on the left side is a stamp issued in 2012, commemorating the 400th Anniversary of the Reunification of the Russian State, while the other one is from 2009, from a set of 4 stamps representing the Solovetskie Islands, and this stamp here shows the St.-Troitky church.

No objection, Russia has one of the most beautiful stamp issues!

Thanks for reading...hope you liked the posts today...sorry for the excessive rambling though :)
Posted by Ana
Email ThisBlogThis!Share to TwitterShare to FacebookShare to Pinterest
Labels: 2013, lighthouses, NDC RR, officials, Russia, Tokarevskaya Koshka, Vladivostok