Ok...i need to make myself another cup of coffee before i get down to this post...i seem to have finished my first one way too soon...will be back shortly.

mmmm, some coffee, and the world immediately seems to feel better!

I fell for this card the first moment i saw it...coz of the way it "shows" the Berlin Wall...very cool idea, and you know how much i like cool cards!
The only real memory i have about it, is from when i was little, and when there was this breaking news on TV, showing how they are knocking it down and how people from one side cross on the other and vice versa...i was little, so i didnt really get the whole fuss about it...to me back then it just seemed as a 10 metre wall being flatted down, and i couldnt possibly figure out why didnt just go the round way and pass by it if they so much wanted to go on the other side?! I mean, 10 metres is not much to walk....well, it was the mind of a 9 year old speaking....thinking if people on the east side coudlnt actually go shopping on the west one....
well, you all know the significance the Berlin Wall has and the whole story behind it, or at least what it represented back then.
It was, what it is called, the Iron Curtain between Western Europe and the Eastern Block...people who were caught trying to cross it, were usually killed, and it was people from East Berlin who were trying to go to the western part...
I like how the card represents the West allies on one side and the East (the Soviets) on the other...which is how Berlin was divided some time after the WWII. The white line in the middle represents the famous Berlin Wall, which was actually 140 km long...(and not just 10m. as the little me had thought).
It just funny to actually think that someone needed a passport/visa to be able to cross on the other side of their own city (if they were allowed to cross in the first place).
There is much to talk and talk about the Berlin Wall, of course, with both sides having their own versions of the facts, but still, its a really interesting read...and if i ever get a card showing the Berlin Wall for real, i will get into some more insight about it.
For now, here is just a small map of Berlin, showing the border and the checkpoints from where you could go on the other side...there certainly is a huge difference between the blue and the red dots. 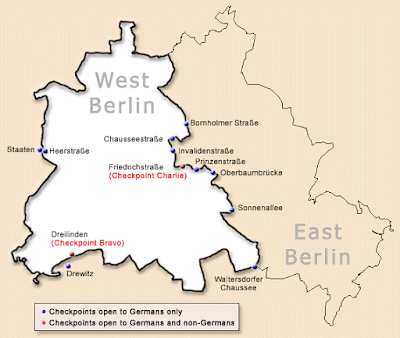