And for the end of today, I left these four super cool cat cards sent by Bryon, cos I don't know if you know, but for a while now, a new adorable cat has been part of our family... again. And life just makes more sense.. again.

Cos what else could you do when you see this little terrified kitten in your backyard, abandoned by its mother, yet, she protects and feeds the rest of the three kittens from the litter. It gets you both angry and overprotective, and that's how yet another story had started and the Little Bullet took a special place in my heart in an instant (She is not so little anymore. In fact, quite big and heavy for a cat that hasn't even celebrated its first birthday, but that's what makes her more adorable too) 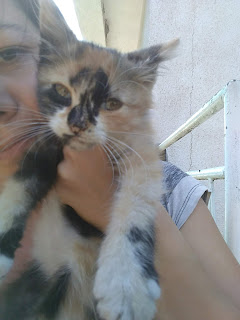 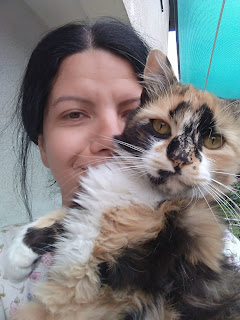 I think it is obvious she has been well fed :D

This cat story has an additional recent kitten story, but about that, in a future cat-post :) 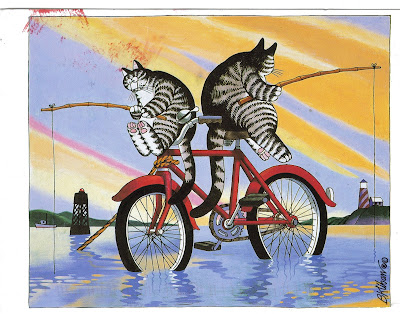 B. ‘Hap’ Kliban was born on January 1, 1935, in Norwalk, Connecticut. He began painting and drawing while he was in elementary school. As a teenager, he joked about wanting to join the Air Force to strafe civilians, something that epitomized the bizarre sense of humor that later characterized his cartoons and drawings 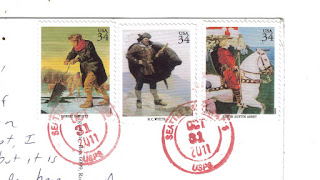 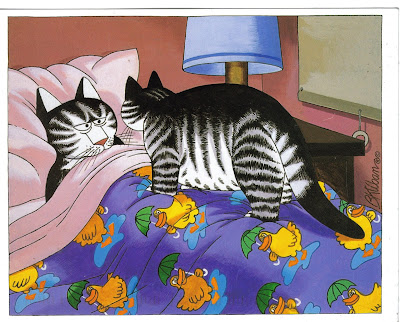 In 1962, Kliban became a Playboy cartoonist, contributing cartoons until his death. He is best known for the book Cat, a collection of cartoons about cats drawn in Kliban's distinctive style. The cat cartoons were discovered by Playboy editor Michelle Urry and the 1975 book Cat was born. This led to several other books of cartoons ending with Advanced Cartooning in 1993.

Along with the Navajo Jewelry. some dinasourish stamps too coming from The World of Dinasours sheetlet issued in 1997. Shown here are Edmontonia, Camptosaurus and Corythosaurus. 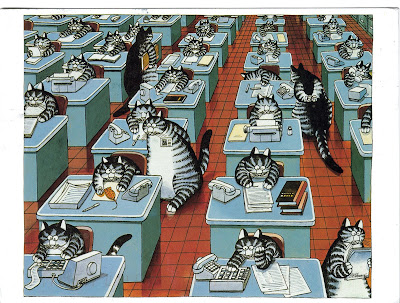 Judith Kamman Kliban trained in fine arts where her main interests were landscape painting and photography.  In 1975, she moved west to San Francisco where she radically changed her lifestyle, and continued to pursue her ambitions as an artist and designer. Living in San Francisco she worked as an advertising agency art director and as a freelance designer. She also continued her painting and photography.
During the crazy mid 1970's, Judith met artist and cartoonist B. Kliban and began a deep and lasting friendship. They later married and enjoyed a wonderful creative and spiritual alliance. While Hap continued to create and publish other humor books and Playboy Cartoons, Judith ran the business and became the Art Director/ Designer and facilitator of all B. Kliban®Cats Licensing and Design. 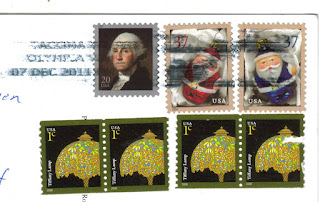 The very well-known Tiffany Lamp and George Washington stamp, side by side with two Christmas stamps from 2004. 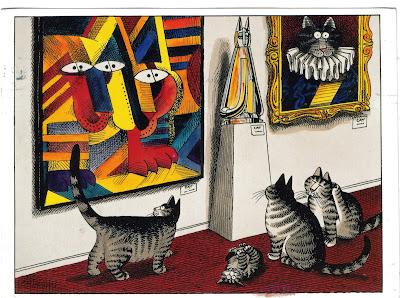 The husband and wife team ran the business as a "cottage industry," preferring to keep things simple, under control, and small.
Since B. Kliban's untimely death in 1990, Judith has continued to expand and strengthen B. Kliban®Cats. The positive changes have promoted growth and added more polish to the classic license, Cat. Judith works on creation of new Kliban concepts and calls upon the huge residual of work from B. Kliban's prolific artistic life. As a designer, Judith's wide experience in design and with Cat enables her, in a way, to continue even today her collaboration with her husband. 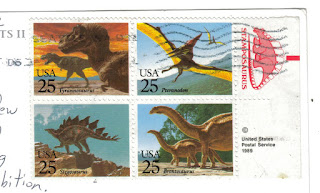 and more prehistoric animals on stamps here, these coming from 1989, featuring the Tyrannosaurus, the Pteranodon, the Stegosaurus, and the Brontosaurus - Correct name is Apatosaurus.

Big thank you to Bryon for these beauties, and to all of you as well for dropping by.

Be sure to drop by soon for another fairy-day post. Who is it gonna be this time? Well, you have to wait and see :)

Now I am off into some big shadow... like the basement maybe.
Posted by Ana
Email ThisBlogThis!Share to TwitterShare to FacebookShare to Pinterest
Labels: 2011, 2012, cats, Kliban's cats, surprises

I have forgotten about those Kliban cards. They are hard to find here and I have not seen them in stores for a long time now. I need to do some serious searching for more of them. They are quite silly sometimes!

well, that's what happens when one waits for years to post something... you totally forget about it...