In general, I am used to receiving Escher cards mainly from the Netherlands, but who said they couldn't arrive from the USA too :)) 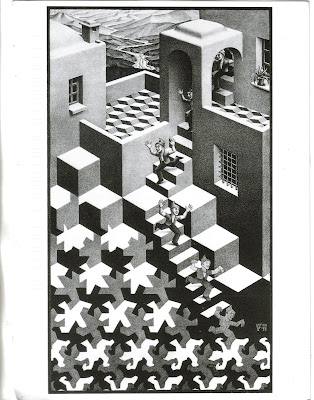 The first card shows Escher's litograph work called "Cycle" dating from 1938. I wonder if the little guy on the card is excitedly running down the stairs to check his mailbox (as Bryon pointed it out :D). I for sure look like this when I actually notice the postman through the window, and hear the sound of him dropping something in the mailbox :))) 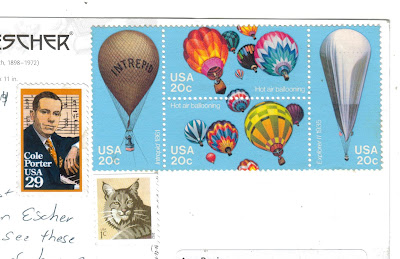 The first card arrived with this fabulous 1983 set of balloons, where on the left side the Intrepid (1861) is shown, a hydrogen gas balloon or aerostat built for use by the Union Army Balloon Corps for aerial reconnaissance purposes during the American Civil War.
It was one of seven balloons constructed for the Balloon Corps and was one of the four larger balloons designed to make ascensions to higher elevations with a larger lift capacity for telegraph equipment and an operator. It was the balloon of choice for Chief Aeronaut Thaddeus Lowe overlooking the Battle of Fair Oaks.
On the right side you can see the Explorer II, a manned U.S. high-altitude balloon that was launched on November 11, 1935 and reached a record altitude of 22,066 m. The helium balloon carried a two-man crew consisting of U. S. Army Air Corps Captains Albert W. Stevens and Orvil A. Anderson inside a sealed, spherical cabin.
The two stamps in the middle show regular hot air balloons. Still haven't flown with one, but been wanting to do so if I ever go to Cappadocia, and of course, if my budget allows it at that moment, which I highly doubt, since it revolves around 160 euros... per person, not per balloon :D

There are two other small stamps on the card - the 1c Bobcat from 2012, while the other one is from 1991, showing Cole Porter.
As you could notice, none of these stamps have been cancelled, which is actually way better than what happened with the stamps on the card below... 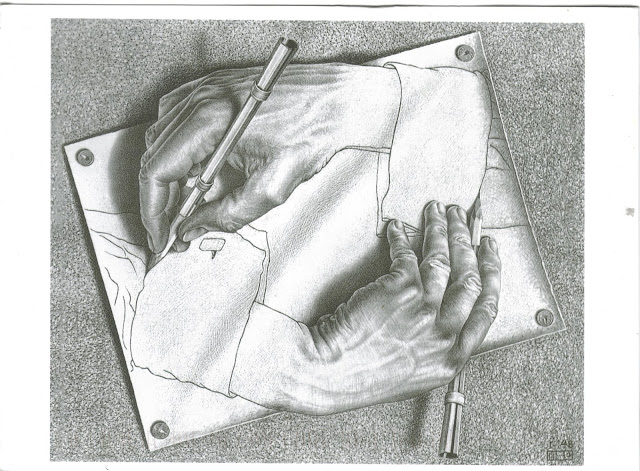 This is another one of Escher's litographs, titled "Drawing Hands", and was first printed in 1948. It depicts a sheet of paper out of which, from wrists that remain flat on the page, two hands rise, facing each other and in the paradoxical act of drawing one another into existence.

and if you were wondering what was wrong with the stamps, here you go... a pen line all the way from left to right. These kind of people should seriously be banned from post offices or coming nearby ones. This is one of the worst crimes in the résumé of a postal worker, that should be marked in both red and bold. Who had the heart to destroy such a lovely issue of four Coral Reefs stamps issued in 1980. Featured are: the Chalice Coral from American Samoa, the Finger Coral from Hawaii, the Brain Coral from the US Virgin Islands, and the Elkhorn Coral from Florida.
Again we have two smaller stamps. First is the Flag over the Supreme Court issued in 1981, and next to it is a bird stamp from a set of 3 issued in 1991.
Posted by Ana
Email ThisBlogThis!Share to TwitterShare to FacebookShare to Pinterest
Labels: 2014, art, artists, M.C.Escher, surprises