A card showing a beautiful lighthouse in Genova...and I think that I dont actually have many Italian cards with lighthouses in general... This lighthouse is considered as one of the most famous ones in Italy and also the symbol and landmark of Genova. With its 76 meters it is considered to be the world's fifth tallest lighthouse, but if you consider it as a whole with the natural rock on which it stands, as it is commonly perceived and represented, its height 117 m.
Also, rebuilt in its current shape in 1543 replacing the former lighthouse, it is the world's third oldest lighthouse.

I didn't know till now (since google constantly underlined it) that the correct name in English is Genoa and not Genova as I had thought (and as it is stated on the card, since that's the correct Italian name, and as we also pronounce it here in Macedonia, with 'v'). 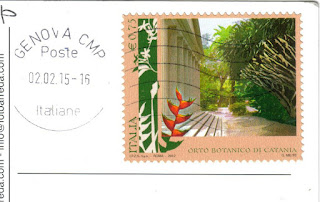 a nice big stamp issued in 2012 in a set of two stamps showing Botanical Gardens (this one showing one in Catania).

Thanks a lot to Carla for the great card and stamp!
Posted by Ana
Email ThisBlogThis!Share to TwitterShare to FacebookShare to Pinterest
Labels: 2015, Genova, Italy, lighthouses, swap