And one more UNESCO for today 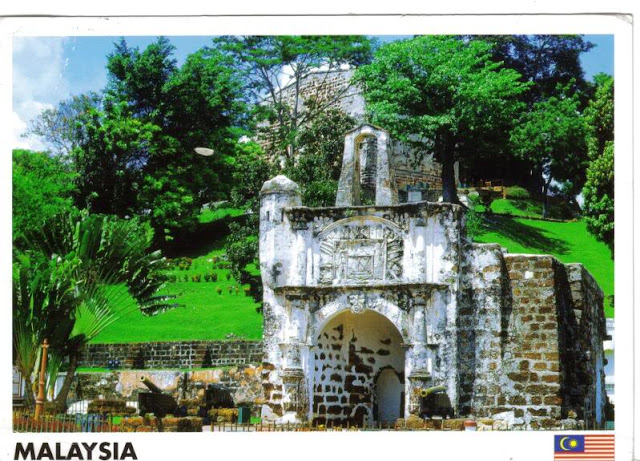 I didnt really intentionally pick up such a high percentage of UNESCO cards for today...unless doing something thematically, i always pick up my cards spontaneously (from the countries allowed)....and for some reason i often make unconscious correlations among them, or with some events happening....odd.
Malacca is the third smallest Malaysian state. t is located in the southern region of the Malay Peninsula on the Straits of Malacca. The state's capital is Malacca Town. This historical city centre has been listed as a prominent World Heritage Site of UNESCO since 7 July 2008.
Although Malacca was once one of the oldest Malay sultanates, the state has no Sultan today.
The Fortress you can actually see on the card is called "A Famosa" and was built in 1511 by the Portuguese. The site had suffered damages during the Dutch invasion, leaving only its gateway as the hallmark of Malacca today. 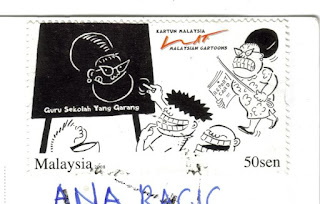 the stamp is just GREAT! I totally love it...and khm, sort of can relate to it...not in an identical situation, but just from a teacher's point of view :)
Its from a set of 6 issued in 2008 regarding Malaysian Cartoon series.

ok...i need to go and take care of some stuff regarding Haris now...for those that know what im talking about ;)
Posted by Ana
Email ThisBlogThis!Share to TwitterShare to FacebookShare to Pinterest
Labels: 2009, A Famosa, Malacca, Malaysia, postcards, swap, Unesco

nice to see your detailed blog.I have a blog of postcards too.http://cardsoftherworld.blogspot.com If you need cards of Asia and other places let me know.