But there is a card overdue that is about time to show... well, there are thousands of cards that are overdue, however, this is new country we are talking about and previously I would post new countries soon after their arrival... however, it has been several months since this one had arrived and it is about time to pay proper attention to it (and funny thing within a short period of time I actually ended up receiving two cards from Azerbaijan, but one at a time :)) 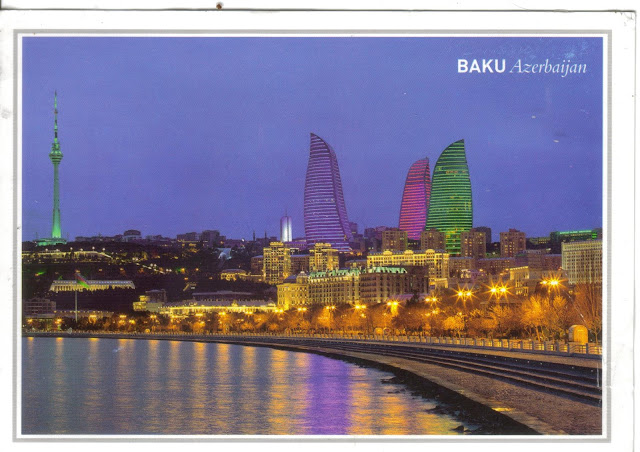 This is one of the countries that I would really love to go to, but the prospects about it right now are rather low, leaning towards non-existent. But oh well, there are other options at hand so it is not that bad after all... but no spoilers right now :)

Anyways, the card shows a really lovely night view of Baku, where you can among else see the Flame Towers which is a trio of skyscrapers, including the tallest in the country, with a height of 182 m.
The towers symbolize the long history of fire worshippers that considered Azerbaijan as a birthplace for the prophet Zoroaster. The buildings consist of 130 residential apartments over 33 floors, a hotel tower that consists of 250 rooms and 61 serviced apartments, and office blocks.
Construction began in 2007, with completion in 2012, with an estimated cost of US$350 million)

The Flame Towers consist of three buildings: South, East and West. The facades of the three Flame Towers function as large display screens with the use of more than 10,000 high-power LED luminaires, as you can see in the video below. 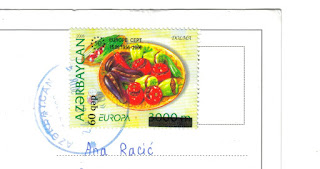 The stamp is from a set of two EUROPA stamps issued in 2006, for the 50th anniversary of the first EUROPA stamp.

Great post. Rare to see a postcard from there!